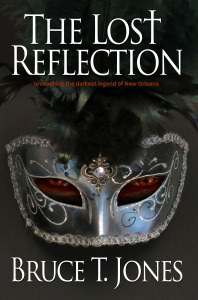 The Lost Reflection, a vampire legend, introduces Brian Denman, a retired CIA agent and lethal mercenary turned private investigator. He unearths the scum and scandals among the politically powerful.

When his friend Phillip Wilder, owner and editor of Urban Legends tabloid, recruits him to gather information for a blockbuster story, Brian cascades into a series of unexpected events. Sent to New Orleans, Brian probes the centuries-old myth of what the Vatican conceals on the third floor of the Old Ursuline Convent.

As he delves deeper into the mystery, Brian is hurled into New Orleans’ dark and dangerous underworld. This labyrinth of vampire lore and mythes, culminates in an epic battle of destiny and revenge. This is the first in book in The Lost Reflection trilogy, an adult vampire thriller.

Many of the characters and locales in the book were inspired by actual people and places in the French Quarter. While a few settings have since disappeared, their memory lives on in the the pages of this book. Several sites and friends have taken on fictitious names for obvious reasons. If you think you know, you probably do. Loose interpretations of historical events have been incorporated, but by no means should any of the accounts be regarded as pure fiction. The vampires are watching.